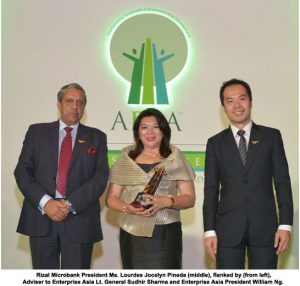 For coming up with the country’s first banking office made out of recycled container vans, Rizal Microbank, the microfinance arm, of Rizal Commercial Banking Corporation (RCBC), recently bagged the Green Leadership Award given by the Asia Responsible Entrepreneur Awards (AREA) at the Resorts World Convention Centre, Sentosa Singapore.

Out of a number of entries from various industries in the country, Rizal MicroBank was recognized for this innovative effort by Enterprise Asia, an organization that honors Asian businesses for sustainable and responsible entrepreneurship.

“This project was pioneered to provide banking services to largely unbanked areas in the country, mostly the rural areas. It is more cost-efficient and significantly faster to complete than putting up a regular branch. An MBO only amounts to approximately P 2.3 million, compared to the usual P 4.6 million cost,” said Rizal Microbank President Ma. Lourdes Jocelyn Pineda.

Moving forward, Rizal MicroBank plans to open seven more MBOs in Southern Luzon in the next few months. Since it started its microfinance operation in August 2010, it already has 21 branches nationwide, thirteen (13) in Luzon and eight (8) in Mindanao, and is still looking to expand its network in various key areas across the country.